Twist-It Sisters Women’s Motorcycle Club (MI) Officially Launched On International Women’s Day – Read How They Got Started – And How To Replicate Their Success!

By: Laura Feist
In: Education
With: 0 Comments 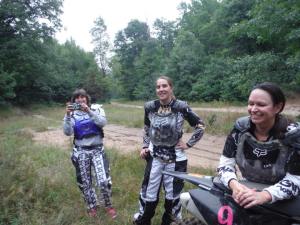 March 8, 2020 was International Women’s Day. Never to be left out, the OHV community was well served on that important day by the announcement of the formation of a women’s club in Michigan. The Twist-It Sisters Motorcycle Club announced on Facebook, “The Cycle Conservation Club of Michigan has welcomed its newest, and first, women’s chapter! The Twist-It Sisters Motorcycle Club has been many years in the making. It began with a Michigan rider seeking other ladies to meet and ride with on an upcoming trip. That ride spawned an annual ride, impromptu day rides, camping weekends, and lifetime friendships.”

Karen slowly began to become more interested in riding motorcycles but found as a new rider that she couldn’t keep up with her husband and his buddies. In fact, Karen was a little discouraged as she felt she “…was holding everyone up and forcing other riders to wait.” 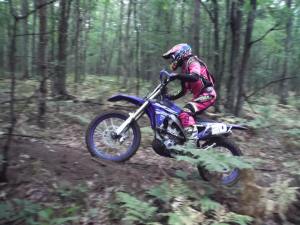 Around 2007 Karen became aware of Cori Chesnutt, a Michigan rider who posted on an internet forum looking for other women to participate in a group ride and camping trip. Initially apprehensive Karen waited to participate. Finally, in 2009 Karen participated in the Annual Michigan Women’s Ride, saying, “That women’s ride was enlightening. I was used to riding with John and his friends but riding with other women was so different. We kept up a nice pace, but there were a lot of stops to chat. And, when we stopped, we waited for every rider to catch up and gave them time to rest before heading down the trail. We may not have covered as many miles as we could have, but we had a great day.”

Another revelation Karen had was that other women riders can share relevant knowledge, “I was riding the wrong bike for my skill level. Some of the other ladies pointed it out and I got a new motorcycle. Also, women face unique challenges with finding the right gear, so having someone who has a ton of riding experience help makes a big difference.”

After just a few women’s rides Karen went from being frustrated and tentative on rides to seriously enjoying not only the sport but the opportunity for camaraderie it provides. These days Karen says, “I am all about riding – we’ve even sold all but one of our horses.”

The Twist-It Sisters started as a Facebook Group, which now boasts over 170 members. Through Facebook the women organized events, trail rides, camping trips, etc. They also created lifelong friendships. Karen said, “there is definitely a social aspect. This winter I tried out snowshoeing with friends I made through Twist-It Sister, and we have gotten together for geocaching, and other events.”

When asked why it is important to have women’s clubs, Karen replied, “Women can be (or seem) more accommodating to other women. It will definitely help us recruit new riders. In fact, Twist-It Sisters vice president, Zuki Sweeny is so committed to finding more women riders that she has been known to bolt out of trailhead porta potties if she hears unfamiliar female voices because she wants to recruit them to be part of the Twist-It Sisters family.”

Now that Twist-It Sisters is formally a club, Karen and the other members seek to not only add more events and members, but also to expand the role of the Club in the future. “We have expanded to having rides in both the Spring and Fall, as well as many impromptu rides throughout the year that continue to be organized through the Facebook Group. We also have some members who are involved in trail maintenance, we would also like to grow advocacy efforts, particularly as they relate to the unique voice of women. Many of us love single track just like the guys, but perhaps decision makers aren’t hearing from us as a group.”

Karen provided some advice for women in other areas who might like to find other women to ride with, or even start a club of their own, “Utilize Social media, it is the best resource out there. If you haven’t already connected with other women riders, search through the many women’s subforums on major riding sites. There are other women out there looking for people to ride with – if necessary, find them and make a Facebook Group or Club, you won’t be disappointed.”

Karen also espoused a more old-fashioned way to get connected, “If you see another woman on the trail, or at the gas station, or just wearing a motorcycle t-shirt – talk to her! If you see me, I would be more than happy to help you out!” 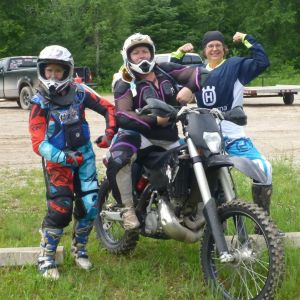 Finally, while Karen understands the importance of clubs and riding groups and the positive impact they can have, she says the single most important thing an individual can do to create a positive future for OHV recreation is to “follow the rules – stay on designated trails, use a spark arrester and keep noise down.”

If you are interested in forming a women’s club, locating other women to ride with or to talk to Karen about her experience, please reach out to NOHVCC staff at trailhead@nohvcc.org.