By: Laura Feist
In: Assistance, Education, Engagement, Uncategorized
With: 0 Comments

Below is a recent press release shared by OuadNB (formerly the New Brunswick All-Terrain Vehicle Federation) in Canada. The release notes the name and logo change and highlights efforts to attract riders and increase membership. NOHVCC congratulates QuadNB and encourages OHV leaders to evaluate whether their clubs or associations could benefit from taking similar actions. 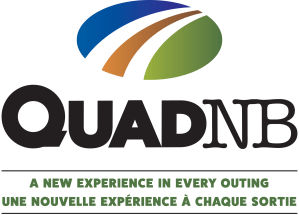 FREDERICTON, N.B. – The New Brunswick All-Terrain Vehicle Federation (NBATVF) is rolling out a new logo and name which will better position the organization as a more inclusive and forward-looking for enthusiasts of the very popular recreational activity. Now called QuadNB, the new name and logo will facilitate the organization in promoting itself as a tourism product to attract more quad (ATV) riders from across the country and the world.

Quad culture has been completely transformed over the last five years with the arrival of side-by-side types of quad vehicles. New Brunswick is a unique place which has incredible locations from where quad enthusiasts can ride 10,000 kilometres of trails along the Atlantic coast to the Appalachians through scenic trails along valleys, plains, rivers, lakes and forests which all hold wonders to discover – and QuadNB will be taking steps to better promote these opportunities.

This new image will allow QuadNB to better define what has become an all-season sport, with the logo portraying prominent colours common throughout various times of the year. The new slogan – “A new experience in every outing” – encompasses what the sport seeks to be in today’s world. In order to implement the new image, QuadNB will increase its visibility in collaboration with consulting firm NuFocus which developed the new image and strategic marketing plan.

“We are very happy with this new image because it reflects the current and future state of our sport,” says Roger Daigle, President of QuadNB. “We have already received positive comments from stakeholders, a good sign as we ride into the future.”

The sport of ATVs has evolved greatly in recent years. Supported by its strategic marketing plan, QuadNB has identified the need to clear up popular myths and improve the sport, which is now more family and socially oriented. Enthusiasts can be found riding outdoor trails throughout the province at all times of the year.

Several steps have also been taken to attract more riders and to increase QuadNB’s membership. The association has partnered with several businesses across the province to offer member incentives. New themed trails aimed at tourists are under development with maps to be available in the near future. Members, tourists and others who are interested will soon have access to an interactive map which will better assist them in travelling QuadNB-managed trails. A website www.quadnb.ca geared toward members, tourists and the general public will also be added as part of this modernization initiative.

“This is all being done in order to make the quad experience in New Brunswick more unique and accessible. We ride 12 months of the year, Spring, Summer, Fall and in Winter, we have our own groomed quad trails,” Mr. Daigle says.

“This new image is a complete transformation and will offer a better approach to attract tourists from both inside and outside the province,” says Jacques Poirier, Executive Director of QuadNB. “These new marketing initiatives will allow us to improve our products offerings to current and future members.”

QuadNB has nearly 24,000 members in 56 clubs. The economic impact of the sport in New Brunswick is estimated at $358 million annually. The clubs invest time and money into the development of their trails, not to mention undertaking millions of dollars worth of repairs annually for ongoing maintenance and repairs to trails – in itself a major contribution to New Brunswick’s tourism industry.