By: Duane Taylor
In: Assistance, Education, Engagement
With: 0 Comments

“That’s a hard question to answer,” said NOHVCC State Partner, Andy Grover.  Andy had been asked where he was from.  It turns out he was born in Buffalo, NY, and spent years in Canada before finally ending up in Missouri.  We at NOHVCC believe that the OHV community in Missouri is likely thrilled he ended up there given what he has accomplished since his arrival.

“When I first got to Missouri in 2015, I had no idea how to find others to ride with.  My then fiancée recommended I start a Facebook Group – she couldn’t have guessed what that would lead to.”

Andy started the Missouri Moto Trail Riders Facebook group and found like-minded riders in his new home state, which led to riding trips to other states.  “We were riding in Tennessee, and I took notice of the positive economic impact that our sport was having on local communities.  I knew we could have something like that closer to home.”

Like most of us, Andy turned to the internet to do some research.  “I found NOHVCC early on.  I couldn’t identify an OHV club in Missouri, so I decided to see if we could turn our Facebook group into a club and NOHVCC had tools that could help. In 2016 Jack Terrell and Dan Kleen with NOHVCC helped us get the club started.  We figured out pretty early on that if we wanted to truly engage public land managers, we needed to take some steps including getting the club recognized as a 501 c 3.”

Once the tax status was taken care of Missouri Moto Trail Riders club, or MO-Moto for short, was up and running.  “We found interest in the club from all over the state.  Our first year we signed up 200 members.”

Since then, MO-Moto has signed a Cooperative Agreement with the Forest Service and has been engaged in volunteer efforts on the Mark Twain National Forest.  One example of their efforts was a single cleanup day that resulted in 65 volunteers removing 10.7 tons of trash and 2.7 tons of tires.

The ongoing relationship between MO-Moto and the Mark Twain started inauspiciously.  Andy said, “I started out just cold calling Forest Districts. Luckily, a conversation with the Recreation Manager Chris Wood led to a meeting where we were able to discuss our organizational goals and express our willingness to work as volunteers.”

“Chris’ involvement early on was vital to our future successes.  He invested days on the trail with us, which helped us speak the same language as the land managers and set us on the right track.”

Andy credits NOHVCC’s support with helping MO-Moto achieve its goals. “The guidance from NOHVCC works.  It is all about building and maintaining positive relationships and conversations with land managers.”

After getting the primarily ATV-focused club up and running, Andy and other club members realized that it would be important to include motorcycle and ROV enthusiasts to their growing membership.  “We recognized that a majority of motorized users of the Mark Twain were showing up with side-by-sides.  The market had changed.”

In April 2021 there was a change at the Mark Twain National Forest as well – Michelle Capp had taken over as District Ranger.  Andy said, “Michelle reached out to me within her first month on the job.  She was very helpful and remains active and engaged.” 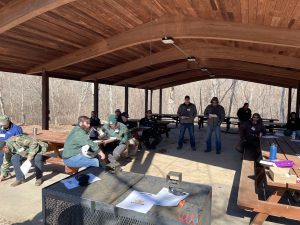 According to Andy, a recent (March 2022) NOHVCC Great Trails Workshop helped strengthen the relationship between Mark Twain officials and MO-Moto.  “Thanks to funding from the Forest Service we were able to get NOHVCC out to hold a Great Trails Workshop.  Getting the Forest Service, other agency personnel and enthusiasts together to learn about trail layout and the types of recreation riders are looking for led to great conversations and helped us all better understand each other.”

Andy continued, “In addition to improving relationships, the workshop really helped me to better understand trail layout and design principles.  Prior to the workshop I had read the Great Trails Guidebook from start to finish at least twice.  But I still came in green.  The field exercises really helped me visualize things like rolling dips and grade reversals.  I think it is imperative that any enthusiast who volunteers for maintenance or other on-the-ground efforts understand these concepts.” 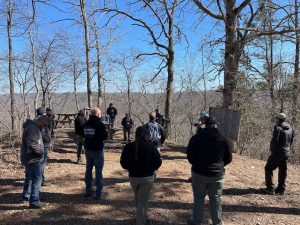 In the few weeks since the workshop things seem to be headed in the right direction.  There is better communication between the Forest and enthusiasts and Andy is hopeful that riding areas will be improved, and opportunities increased. “We have already been hearing from Mark Twain officials about the potential to make more trails open to more riders.”

Finally, Andy was asked, “what do you think the most important thing an individual can do to create a positive future for OHV recreation.”  He replied, “one of the most important things is to get involved.  If you have an area you care about show pride and take ownership.  I would like to see more people engage in traditional clubs instead of just Facebook groups.’  Even if you can only volunteer one or two days a year, or donate funds, please support existing clubs, or create a new one.”

MO-Moto is proof that Facebook groups can become effective clubs with proper guidance and leadership.  If you are interested in starting or finding an existing club, please reach out to us at trailhead@nohvcc.org.