Last year the National Off-Highway Vehicle Conservation Council (NOHVCC) highlighted a great example of disparate recreation groups coming together to get results.  You may recall that a newly formed group – the Snake River Trails Alliance – used funding from several sources to construct a bridge on the Bear Creek Trail, a multi-use trail on the Palisades Ranger District of the Caribou-Targhee National Forest.

You can read about that initial effort here:

Beer, Bears, and Groups that don’t Usually Play Well Together for $400 Alex – How Collaboration Achieved Results in Idaho

Anyone familiar with NOHVCC’s philosophy knows that we believe collaboration works.  We are delighted to present this follow-up story to the one linked to above as it highlights that working together is the best path to success.  Brian DiLenge, East Region Trail Specialist, Idaho State Parks and Recreation, and initial driving force behind the creation of the Snake River Trails Alliance said it best when he quoted the English Proverb, “many hands make light work.” 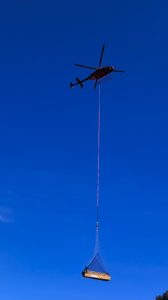 We had an opportunity to chat with Brian and he let us know that work on the Bear Creek Trail project was completed recently.  Brian said, “The final chapter of this project ended this last weekend. We had around 50 volunteers on Saturday that built or finished the second 45’ bridge on Bear Creek, and on Sunday we had around 40 volunteers that worked on polishing up and widening some re-routes just before the last bridge.”

One of the coolest elements of the on-the-ground (or, in this case in-the-air) work was that materials to build the bridges had to be brought in by helicopter.  Brian said “the bridge we just completed is five and a half miles from the trailhead, with the single-track recreational trail the only way in.  So, because of the mountainous terrain, creek crossings and tight conditions – our only option to bring in multiple 40 and 45-foot beams was by helicopter.”

We think everyone can agree that using helicopters for trail work is awesome, and that getting new bridges to make a trail more useable and sustainable is a success by any definition, but the real victory is the ongoing partnership that made it all possible – the Snake River Trails Alliance (SRTA).

SRTA consists of representatives from ATV, motorcycle, equestrian and mountain bike clubs, and local businesses.  The Bear Creek Trail project was the first the Alliance has taken on but won’t be the last. Brian commented that the Alliance is securing financial commitments to fund future projects and that it recently reached an agreement with the Idaho Falls Recreation Department to build a mountain bike park.

The ongoing success of the Alliance is attributable to the diverse array of partners who have bought in to collaboration and who work together.  The Bear Creek Trail project took advantage of “many hands make light work” approach espoused by Brian.  Craig Stoddard with the Snake River Mountain Bike Club commented, “I have backpacked and ridden my bike in the Bear Creek drainage over the years. When I learned about the opportunity to team up with the Forest Service, and other user groups, I was all in.  Having the opportunity to be part of the collaboration on the trail reroute and two new bridges has been very satisfying to me. As a bonus, I was the first mountain bike rider to ride across the new bridge!” 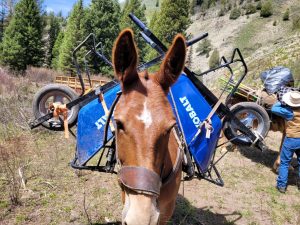 Keeping with the theme of disparate groups working together, Aline Brinkmann with the Eagle Rock Back Country Horsemen of Idaho commented that she and her husband Joe felt “…it was an honor that (Brian) wanted us to help by packing in lunches and water to the people who were working on building the bridge.  The work that was done was very, very impressive and I was amazed.” Aline noted that part of the mission of the Back Country Horsemen of America is “to assist the various government and private agencies in their maintenance and management of said resource.” And “to educate, encourage and solicit active participation in the wise use of the backcountry resource by horsemen and the general public commensurate with our heritage.”  Joe and Aline certainly stepped up and lived up to that mission!

While it is always great when volunteers work together to get results, the project would not have been possible without the involvement of the Forest Service.  Colby Jacobson Recreation Manager/Special Use Permit Administrator, Caribou-Targhee National Forest, Palisades Ranger District weighed in, “The Forest Service has been incredibly surprised and grateful for the amount of support this project has received from individuals and user groups. I think the passion these volunteers have for recreating in the mountains drives them to be incredibly hard workers on a project like this. Everyone seemed to be working so hard and having fun. These were awesome people to work with. I believe that since these folks are avid recreationists and so familiar with the activities we did during this event that it made them safe. We had people swinging Pulaski’s and hammers, using rock bars, digging with shovels, pushing wheelbarrows, riding bikes on mountain trails, and other such activities and no one got injured.”

Brian pointed out other examples of working in partnership that made the Bear Creek project possible, “Once again 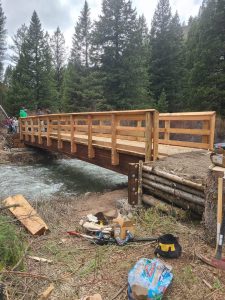 KLIM prepared all the food and the food that was provided was supplied by KLIM, Lithia Ford, Wackerli Car Dealership, and Action Motorsports. We also had representation from two groups not associated with SRTA, but that wanted to be part of the last chapter – the Back Country Deputies of the Bonneville Sheriff’s Department and the group AMPL, Advocates for Multi-use on Public Lands and, Brandon Glanville from Upshift was there to witness the groups’ efforts and write about it.”

When asked if he thought the success of the Snake River Trails Alliance could be replicated in other areas of the Country Brian was adamant, “Absolutely! I got the idea from similar efforts I saw have success in other areas.  I saw that some enthusiast groups didn’t have enough people to complete even small projects on their own, so I gathered representatives from a bunch of different user groups, and we sat down and said, ‘why don’t we build a diverse group to help us make progress on our projects together.'”

Finally, Brian believes that the most important thing individuals can do to protect resources while ensuring access to public lands is to “Take the time and get involved with the process.  Get involved with trails groups, clubs, and alliances.  There are relatively few government agency officials trying to manage use for millions of users – they want your input.”

If you would like to learn more about the Snake River Trails Alliance, the Bear Creek Trail project, or would like opportunity to speak directly with Brian, join us in Knoxville, TN August 18-20 for the NOHVCC Annual Conference.  Brian will be on site and will make a presentation about his experience working collaboratively with diverse groups.