By: Duane Taylor
In: Engagement
With: 0 Comments

Off-highway enthusiasts and California State Park employees headed to the West steps of the State Capitol on December 22, 2021, to commemorate a historic, final event in the year-long celebration of the OHMVR Division’s 50th Anniversary. It was on this date and near this spot that, back in 1971, Governor Ronald Reagan signed the Chappie-Z’berg Off-Highway Motor Vehicle Act into law, which eventually created the Off-Highway Motor Vehicle Recreation (OHMVR) Division within California State Parks. 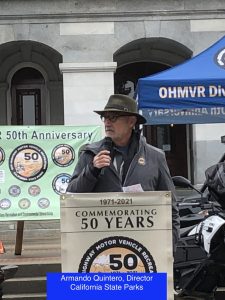 State Park employees and representatives from off-highway vehicle (OHV) recreation non-profit groups came from all over California to be part of this event. The attendees, including Director Armando Quintero, braved the cold winter weather to hear a discussion on the history of OHV recreation in California by Tom Bernardo from the OHMVR Division, along with speeches by Director Quintero, OHMVR Deputy Director Sarah Miggins, OHV Commissioner Roger Salazar, California Outdoor Recreation Foundation (CORF) President Paul Slavik and CORF board member Amy Granat. The Master of Ceremonies, dressed in his historic OHV uniform jacket from the 1980’s, was Mike Lynch from the OHMVR Division.

One of the highlights of the event was to be able to bring vehicles representing the past and present of OHV recreation onto the capitol steps. The vehicles included the OHMVR Division’s Jeep Rubicon, a four-door code-3 “side-by-side”, and two electric dual-sport code-3 motorcycles. Also included were a retro-style Jeep owned by OHMVR Deputy Director Sarah Miggins and a Rubicon Trail-worthy Jeep contributed by OHV Commissioner Roger Salazar. The most historic vehicle on display was the “Expedicion de las Americas” Jeep, brought to the event by its current owner, Chris Collard. In late 1978, this Jeep traversed over 21,000 miles from Terra del Fuego, Chile to Prudhoe Bay, Alaska through the Darian Gap, a nearly impassable route between Central and South America. 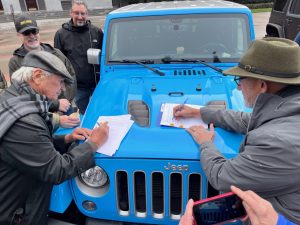 Capping the historic significance of the event was the signing of a fundraising agreement between CORF and the OHMVR Division (see related article). Director Quintero and CORF President Paul Slavik utilized the hood of Deputy Director Miggins’ Jeep to formalize the work that CORF has done and will continue to do for the Division and OHV recreationalists across California.

The OHMVR Division and the 50th Anniversary Committee wish to thank all those who participated in the activities and events throughout the year. We also would like to acknowledge all the partner agencies, non-profit groups and individuals who supported our mission of providing high-quality, world-class OHV recreation while maintaining the highest resource management and safety standards. As we in the OHMVR Division like to say, “Be Safe, Be Responsible, and Know Before You Go!”

2022-02-08
Previous Post: Save The Date! The NOHVCC 2022 Annual Conference Will Be In Knoxville, Tennessee!
Next Post: Project Update – Progress At Prison Hill