Nearly ten years ago the federal government sought to turn management of the decommissioned Badger Army Ammunition Plant that operated during World War II, the Korean War, and the Vietnam War over to the Wisconsin Department of Natural Resources (among other agencies) for management.  The DNR along with all sorts of recreationists saw an opportunity to utilize the area for hiking, hunting, birdwatching and other activities.  At first it seemed unlikely that motorized recreation would ever occur on the area, but NOHVCC Wisconsin State Partner Bryan Much had a unique idea. 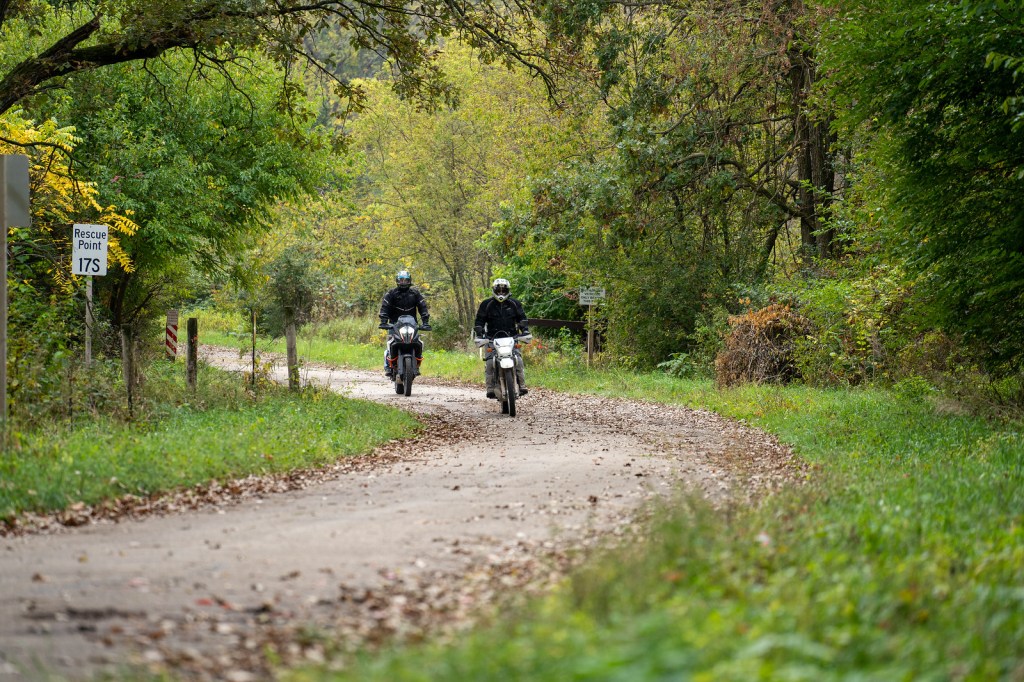 Ultimately, the former ammunition plant became Sauk Prairie State Recreation Area located in southeastern Sauk County, Wisconsin, and it does allow for all sorts of recreational access, but, until October 3, 2021, off-highway motorcycle (OHM) riders did not have access to any trail there.

How did Bryan and his colleagues finally get an opportunity to enjoy a ride in the Area?  Perseverance, ingenuity, and hard work.

Bryan’s idea in his own words: “I made the pitch that a horse, hiking, or mountain bike trail (as examples) could be opened for OHM riders a few times per year.  This would create opportunities for OHM riders in underserved areas without having to have more land or facilities.  If repurposing was put into place on multiple properties over multiple dates, we could have significantly more places to ride in underserved areas.  I presented the concept to the DNR and after some follow up work the DNR adopted the concept of repurposing.”

Of course, Bryan would have preferred dedicated OHM trails riders could use year-round, but only after meeting considerable opposition to that possibility did Bryan decide to pursue trail-sharing. Bryan said, “As the controversy over the newly acquired property continued, it was clear that OHM riders would not get a permanent trail there.  It was a huge lift, but the DNR opted to include the repurposing concept in the master plan for the property.  I would rather have had a dedicated OHM trail that I believed we were entitled to, but I recognized that getting anything was better than nothing.”

Even after the DNR included repurposing in the master plan, there were many hurdles to overcome.  There was an ultimately rejected court challenge that took three years to play out, but finally motorcycle riders in Wisconsin were able to prevail and an event was permitted and planned.

Bryan said, “Eventually the path was cleared to have our first repurposing event on the Area.  I started work on the event about a year out, formed a club to support the event, and worked with various officials to get things lined up.”

After the permit was issued, one may have thought that the fight for the ride was largely over, but, once again, the perseverance of Bryan and his colleagues was tested.  “On the Friday morning before the ride, opponents of our efforts went to court in a surprise move to try to stop the event.  They did not prevail.”

On October 3, 2021, Bryan and crew went forward with the ride as planned.  As President of the Wisconsin Off-Highway Motorcycle Association (WOHMA) Bryan shared a WOHMA Facebook post following the event describing the ride:

After only 11 short years of working on it, we had our first dual sport motorcycle event at the Sauk Prairie Recreation Area today.  It was a wonderful time.  The club we put together to host events there did a fabulous job.  They were very conscientious and did everything they were supposed to do and more.  They dutifully turned away a couple of bikes during pre-ride screening because they failed the sound test.  All the bikes that participated in the event were well within limits.  An inspection of our event path after the ride revealed that we had an almost invisible presence.  We had visits from various officials that were pleased that things were going so well.  The 15-mile loop was scenic and entertaining, I enjoyed it more and more each time I rode it.  I heard a number of people say that they were surprised at how entertaining the path turned out to be.  The weather was great too. It was nice to see so many riders having such a nice time.  We are allowed to ride trails on the property for a certain number of days each year.  Today was the first time we were able to take our turn sharing this public land with a dual sport motorcycle event.  It went incredibly well, and people had a great time!  Looking forward to future events! 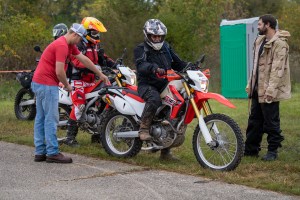 Bryan was reflective after the event, saying, “Over the years I was told by a number of people that I was wasting my time and that we’d never get motorcycling on the property.  I stayed with it as I thought it was bigger than just this property.  Glad I did as things have worked out so far, though the battle still isn’t over, I’m sure.”

Bryan and crew were aware all along that they faced an uphill battle, and perhaps an unwinnable struggle to get dedicated year-round OHM trails, so they pivoted, dug in, and worked hard.  Now that the first event has concluded Bryan is hopeful to have more.

“It was most important to me to win the concept of repurposing and get it working somewhere so we could expand to get the same arrangement on other properties that could not otherwise support a dedicated OHM trail.”

Given Bryan’s tenaciousness, acumen, and commitment to safe and responsible use, no one should bet against his continued success!