By: Duane Taylor
In: Assistance, Education, Engagement
With: 0 Comments 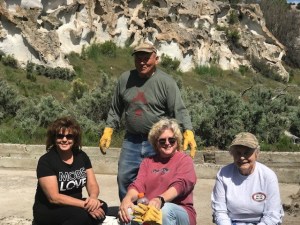 The Paiute Trail is a public OHV trail system located in Central Utah, managed by the Fishlake National Forest and the Richfield District of the Bureau of Land Management. It has over 2,000 miles of trail and is credited with bringing tremendous positive economic impact to the region. Max’s pride in the trail 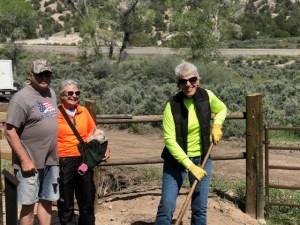 shines through when he says, “I believe the Paiute Trail is the best managed and marked system in the United States and possibly the world.”

The Paiute Trail Committee consists of representatives from state and federal agencies, OHV enthusiasts and safety advocates who meet monthly and promote safe and responsible use of the Trail. Each year the Committee chooses a project to undertake on National Trails Day and this year they chose to provide interpretation of the Belknap Ranger Station along the Paiute Trail near Fremont Indian State Park.

The project was several years in the making and was funded by $22,500 of Recreational Trails Program grant funds and a $5,000 contribution from the Fishlake Discovery Association. Max said, “the Paiute Trail Committee came up with the idea as we know that most visitors to the trail want to know about the history of the area, and the Belknap Ranger Station and the day-to-day lives of Rangers nearly a century ago are very interesting.” 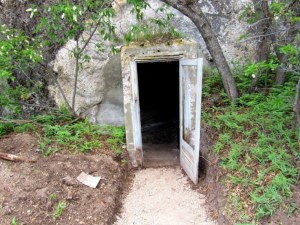 Included in the project was the installation of pathways, metal horses, corral fence, a bridge, and interpretive signs telling the story of a Forest Ranger’s life in a remote mountain location. Over 40 volunteers from the Paiute Trail Committee, the Sevier Valley OHV Club, the Tushar Mountain OHV Club, the Sand Rock Ridge Riders, Utah State Parks (Fremont Indian State Park) and the Forest Service engaged in the activity. 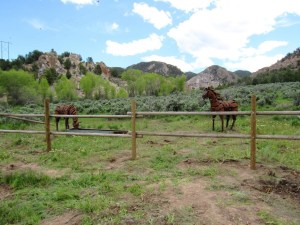 Below are proofs of several of the interpretive signs which include information about the Ranger Station and surrounding areas. Many OHV enthusiasts enjoy learning about the history of riding areas and providing opportunities to stop and engage interpretation lengthens “seat time” and provides for a memorable experience. The proofs below are great examples of such interpretation.

One last story that Max shared really drove home how much this project was “meant to be.” At the outset of the project Max was struggling to find information on the Ranger Station to include in the interpretation. As fate would have it, Max’s next-door neighbor saw an article about the then upcoming effort and reached out to see if Max would have any involvement in the project. Turns out his neighbor’s Dad was the Ranger at Belknap when she was young, and she spent her summers there every year from 1942-1952. Max was able to spend some time with her and she provided photos, written history and stories “by the bucket load.” Her father, known as “Ranger Pete,” inspired one of the interpretive signs (see below).

If you would like to learn more about this project or about opportunities for interpretation please reach out to trailhead@nohvcc.org.