By: Laura Feist
In: Uncategorized
With: 0 Comments 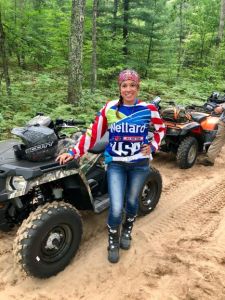 This article is the first in a series designed to feature NOHVCC State Partners and some of the successes they highlighted in their Partner Annual Reports.  The first-ever round of Annual Reports was a huge success. As a result, the NOHVCC Board of Directors and staff are better able to understand the great things our Partners are up to and we wanted to share some examples with the broader NOHVCC community while introducing some of our Partners as well.

Tasha Nielsen is the Natural Resource and Trail Technician for Webster County Conservation and has spent her time with the day-to-day operations at Gypsum City OHV Park since 2014 and has been a NOHVCC Partner since 2015.  She was born in Minnesota, but moved to Fort Dodge, Iowa when she was twelve and considers Iowa home.  Tasha has been around OHVs most of her life and enjoys the challenge of learning to operate new off-highway vehicles and other equipment.  In addition to motorized recreation, she enjoys hunting, ice fishing, kayaking and golf, and generally being outdoors.  She believes the most important thing an individual can do to create a positive future for OHV recreation is to be a good example by recreating safely and responsibly.

When Tasha was approached about the opportunity to lead representatives from Travel Iowa, the official tourism website of the State of Iowa, on a tour of the Gypsum City OHV Park she jumped at the chance.  As a result of an existing partnership with the Iowa Convention and Visitors Bureau, Travel Iowa was interested in promoting the Park.  Travel Iowa had recently had success promoting Iowa attractions on its website and was looking to replicate some of that success with outdoor recreation, which consistently ranks high in surveys of Travel Iowa’s customers.  As the largest OHV park in Iowa, Gypsum City was an obvious choice to highlight.

Tasha worked with others to arrange a tour for three representatives from Travel Iowa.  Her passion shines through when she describes the opportunity saying, “It never gets old introducing someone new to the Park!” She then described the features of Gypsum City which include camping, fishing and other fun activities in addition to OHV recreation.  She had the opportunity to show off the Park to the Travel Iowa representatives using ATVs and ROVs.  As one might expect, the tour had to be extended to capture on camera all the Park has to offer.  It is also likely that everyone was having too much fun to quit on time!

The tour led to Gypsum City OHV Park being featured on the Travel Iowa website: https://www.traveliowa.com/destination/gypsum-city-ohv-park/6821/.  Having the park on the website has been beneficial for all parties as page views have dramatically increased and visitors to the website stay on the page much longer.  Tasha said, “When people visit the site and look at all the Park has to offer, they really have their eyes opened.”  Having the Park on the official State tourism site also has the benefit of drawing additional people to Gypsum City both from within Iowa, and from out-of-state.

Tasha eagerly pointed out that the Travel Iowa website includes information on safety and following the rules.  From the site – “Machines must be registered and licensed for use in the park. Non-residents also need to obtain a Non-Resident User Permit. Drivers and passengers are required to wear helmets and seat belts at all times. Obey all posted signage which clearly indicates your travel direction, trail number, level of difficulty and the types of vehicles that can use the trail. Most of the trails are two-way, which means riders can be approaching you at any time – watch your speed.” Tasha also described the Park as a place that allows OHV recreationists to easily “learn how to be safe and responsible riders,” as a result of rules, signs and organization. 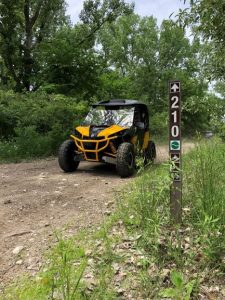 The benefits of partnering with your State’s tourism agency are obvious.  If you would like to replicate what Tasha has achieved in Iowa, please contact NOHVCC at trailhead@nohvcc.org. NOHVCC staff can offer advice, and maybe even get some help from Tasha and her partners!

The Gypsum City OHV Park is located on the southeast corner of Fort Dodge. The park is approximately 800 acres in size and includes 60 miles of trails for use by ATV’s, side by sides and off-road motorcycles. The park also includes a 1.5 mile motocross track, a .4 mile kids’ track, and a beginner circle track. Trails within the park range from open prairie for novice riders, to heavily timbered areas for more advanced riders and include water crossings and mudding areas. Trail head signs within the park will indicate what machines are allowed on certain trails.

2019-01-28
Previous Post: Colorado Organizations Partner to Create User-Friendly Trail App
Next Post: 2018 NOHVCC Annual Reports Are In! See What We Found Out!