By: Laura Feist
In: Assistance, Education, Engagement, Uncategorized
With: 0 Comments 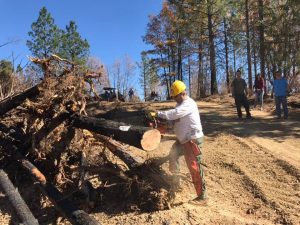 The OHV area suffered greatly from the recent Carr fires and there have been closures to OHV trails as a result.  Instead of waiting and hoping, PWORA jumped in to offer volunteer assistance by hosting a Chappie-Shasta OHV Recovery Work Weekend starting October 19.

After a kick-off session, teams were formed to perform barrier construction, install signage, and conduct erosion control and general trail repairs.  The event was well documented on Facebook with pictures and video.  Visit https://www.facebook.com/groups/677479795963782/ to view pictures and click here to watch a short video to get a feel for what the event was about and the type of work performed.

PWORA President Don Amador noted that this would be the first of many work events saying, “It’s clear to me that both motorized and non-motorized recreation sites in California and the West will continue to face the likelihood of more intense wildfires over the next 10-20 years.  Creation of our wildfire recovery program is relevant and timely given the impacts that the Mendocino Complex, Carr, and Ferguson Fires had on popular destination OHV areas.”

PWORA stands as an example of proactively addressing OHV access issues.  Certainly, there are many serious issues to address after catastrophic wildfires, but through organization and volunteer effort it is possible to not only reopen OHV access, but also to protect recovering resources.

Partnerships with public land management agencies will also be key to PWORA’s success. PWORA has secured positive relationships with its work in Chappie-Shasta and hopes to bring a similar level of volunteerism to other areas that have suffered fire damage.

“I look forward to working with our land agency, OHV club, and conservation partners to recover and reopen recreation areas devastated in the current and future wildfire seasons,” Amador concluded.