NOHVCC Welcomes Two New Members to its Hall of Fame

By: Laura Feist
In: Engagement, Uncategorized
With: 0 Comments

On Saturday, August 18 at its annual Awards Celebration to conclude its Annual Conference, NOHVCC inducted Wayne Daub and Heidi Annau into its Hall of Fame.  NOHVCC’s Hall of Fame induction is reserved for those OHV enthusiasts who have demonstrated a sustained commitment to helping NOHVCC achieve its mission of “creating a positive future for OHV recreation.” 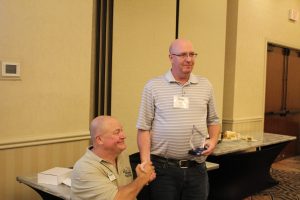 Wayne Daub lives in London, Ontario with wife Grace and has one daughter and one grandchild.  His love for all things motor started early when his father opened up a general “fix it” shop in Kitchener, ON in the mid 70’s.  Dirt bikes and dune buggies made from old Volkswagen bugs were a big part of Wayne’s teenage years.  After getting married and starting a family, ATVs became a priority as well as involvement in area OHV clubs.

Wayne has worked tirelessly to create a positive future for OHV recreation for decades and has served several different clubs and organizations in Canada.

Wayne is currently with the Canadian Quad Council, which only just recently changed its name from the All-Terrain Quad Council of Canada (AQCC). As the staff member for the then AQCC Wayne joined the NOHVCC Board in an ex officio role in 2010.

In response to his induction, Wayne said, “I truly enjoy my role on the NOHVCC Board and continue to learn things with each conference that I attend. NOHVCC is very lucky to have the dedicated volunteers and staff that it does, I wish that someday Canada will have a similar mandate. Thanks to NOHVCC for thinking of me – it is truly a humbling experience to be recognized, and there are many other Board members who work harder than I do.”

In contrast, Dan Kleen, NOHVCC president said during Wayne’s induction, “Wayne is one of the hardest working people in North America. We’re so proud to have a partnership with Wayne. He’s brought a lot to the NOHVCC board as an ex officio member. We can always count on his input, and Canada is lucky to have him working there.” 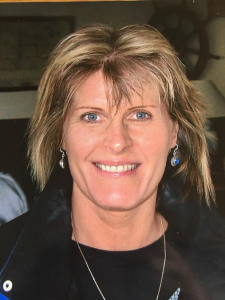 The induction of Heidi Annau was bittersweet as she passed away earlier this year after a two-year battle with cancer.  Heidi’s obituary can be read here.

Heidi was an excellent off-highway motorcycle rider and an active member of the Great Falls Trail Bike Riders Association and was a member of the Rock Pile LLC at the Bull Run Guest Ranch in Cascade, MT.  She worked on numerous volunteer trail maintenance crews and was involved in the layout and facilitation of numerous enduros and trail rides.

Heidi also worked for NOHVCC for nearly a decade and was always an energetic and engaging “voice on the other end of the line” for all who contacted NOHVCC during her tenure.

NOHVCC Senior Project Manager, Jack Terrell said “Heidi’s enthusiasm and passion for the NOHVCC mission was inspiring to all who met or spoke with her, and on top of that, she was a heck of an off-highway motorcycle rider.”

Upon inducting Heidi, NOHVCC President, Dan Kleen, said “Unfortunately, this year we lost Heidi Annau, a very true friend of NOHVCC. Heidi never met someone she didn’t like. And we thought it very fitting to honor Heidi. She’s been a tremendous supporter of NOHVCC. She loved the sport and she loved people. The award was recently presented to Heidi’s sister and she was deeply honored.”