By: Laura Feist
In: Uncategorized
With: 0 Comments

This article is one in a series designed to feature NOHVCC State Partners and some of the successes they highlighted in their Partner Annual Reports.  The first-ever round of Annual Reports was a huge success. As a result, the NOHVCC Board of Directors and staff are better able to understand the great things our Partners are up to and we wanted to share some examples with the broader NOHVCC community while introducing some of our Partners as well.

A new NOHVCC Partner, Terry Lambert is originally from Rhode Island, but moved to NH in 1986.  She got into OHV recreation about 15 years ago when her husband purchased an ATV to help him hunt with an artificial hip.  Over time, Terry became interested in recreational OHV use herself.  After her husband passed away, Terry needed riding partners, so she joined local clubs and has become increasingly more active in supporting motorized recreation ever since.  She discovered that the OHV community is a family and has made some amazing friendships that go far beyond just riding together.  Terry believes the most important thing an individual can do to create a positive future for OHV recreation is to educate riders, so they understand the impacts their actions have.  “When someone doesn’t pay attention to the rules, we lose trails.”

In 2018 the New Hampshire Fish and Game Department implemented a new Club Incentive Program.  Registration rates for OHVs were raised by $30, but OHV owners who produce proof of membership to a club affiliated with the New Hampshire Off-Highway Vehicle Association (NHOHVA) receive a $30 discount on every OHRV registration purchased in their name.  The results have been staggering with a 450% increase in club membership in the State over last year. Terry’s local club had 52 members prior to the Program and now boasts 396!

This increase in membership of OHV clubs across the State not only means that the clubs have some new active members who participate in meetings and events, but also that the clubs have more funds available.  This is particularly important as now many of the clubs can meet the 40% match requirement of a State grant program – which only increases the funding available for trail maintenance and other activities.

“The main reason to join a club is not just to get your $30 discount per each NH State Registration, but more importantly, to get money directly to the clubs so they have the financial resources to improve trails and create new ones. Most Grant in Aid (GIA) which comes from your registration dollars require up to 40% matching funds from the club to qualify for the GIA from NH Bureau of Trails. If you choose not to join a club, the extra registration funds will go to this fund.”

Of course, getting the program in place wasn’t easy.  NHOHVA faced many challenges including difficulty finding a computer programmer who could create the platform which allows the Incentive Program to exist.  The type of development necessary to create the web-based program which is the backbone of the program isn’t cheap – fortunately NHOHVA was able to find a young programmer who offered his help for a very reasonable cost! 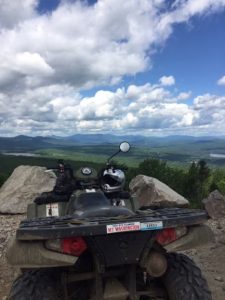 NHOHVA Club Membership Administrator Steve Wilkie attributed the success of getting the program off the ground to effective partnerships, saying “This could not have happened without the clubs coming together through our State Association (NHOHVA) and working as one.  If someone wants to replicate this program in another State, the first step is to get the clubs on the same page.”  He also noted that nothing prevents riders from joining multiple clubs, and many do, which means there is less competition between the clubs.

Terry agreed with Steve’s assessment, saying “there were many times we could have given up, but the people who make up NHOHVA worked hard to get this done – we all just knew how important it is to have adequate funding for trail maintenance.”

To learn more about the program visit https://nhohva.org/.

The benefits of this program in New Hampshire are obvious.  If you would like to attempt to replicate what NHOHVA has achieved in New Hampshire, please contact NOHVCC at trailhead@nohvcc.org. NOHVCC staff can offer advice, and maybe even get some help from Terry and her partners!