By: Laura Feist
In: Assistance, Engagement
With: 0 Comments 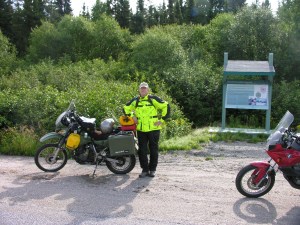 This article is one in a series designed to feature NOHVCC State Partners and some of the successes they highlighted in their Partner Annual Reports.  The first-ever round of Annual Reports was a huge success. As a result, the NOHVCC Board of Directors and staff are better able to understand the great things our Partners are up to and we wanted to share some examples with the broader NOHVCC community while introducing some of our Partners as well.

Ken Kyler has been a NOHVCC State Partner for about seven years.  He first became involved in OHV advocacy when the State of Maryland closed its last public riding area in 2011.  Prior to that, Ken was a lifelong motorcycle rider both on and off highway.  He enjoys adventure rides and has made multi-thousand-mile trips to Canada and back.  Once involved in high-powered rifle marksmanship, he is now challenged by air rifle field target shooting.  Ken grew up in Indiana before travelling the world while in the Air Force and ultimately settled in Keedysville, Maryland.  He likes for results to serve as accolades and prefers to stay out of the spotlight (we won’t let him).  Finally, Ken believes the most important thing an individual can do to create a positive future for OHV recreation is to serve as a bridge between those that don’t know anything about our sport and those that are hardcore enthusiasts. In short, responsible OHV enthusiasts are conservationists and should promote sustainable use.

When the last public OHV riding area in Maryland closed in 2011, Ken knew that he had to get involved.  He and others undertook an effort to work with Department of Natural Resources representatives and other government officials that led to the State purchasing lands to create new riding areas. But Ken and the others were prescient enough to know that long-term funding would be necessary to build and maintain trails. The Maryland OHV Alliance and the Maryland Motorcycle Dealers Association decided to revisit a legislative decision made decades before.

About 20 years prior the State Legislature decided to funnel funds acquired through the OHV title tax to the State Highway Fund instead of to the Department of Natural Resources where it could benefit the users who paid the tax.  The time had come to make sure that at least a portion of these funds would benefit OHV recreation.

The Dealers’ Association retains a lobbyist who was able to lay out a plan that would lead to success.  With State Senator George Edwards fully committed to the idea, and with Ken and others with the Maryland OHV Alliance providing educational support, the team was able to convince the legislature to approve 25% of the collected funds be earmarked for trail building and maintenance the first year, and 50% of the funds each year thereafter.  50% of the funds amounts to about $750,000 annually!

Crucially the team was able to include legislative language that made it clear that the funds can only be used for OHV trail construction and maintenance.  This provides some assurance that future decisionmakers will have a tough time “raiding” these funds for other uses.

Ken believes similar results can be achieved elsewhere.  He noted that this was not an easy undertaking when he said, “If anyone decides to go down this road, they will ask themselves why they got into this on a daily basis – but they should never give up – the results are worth it!”

Finally, Ken recognizes that the way forward for all forms of recreation is to find ways to fund activities saying, “all forms of recreation have some impact on the environment, so users should pay their fair share to maintain resources.  This is also the way to ensure that access is retained.”  In Maryland the OHV title tax paid by OHVers will now pay for maintenance of trails used by OHVers.

If you would like to attempt to replicate what Ken and others have achieved in Maryland, or have any questions please contact NOHVCC at trailhead@nohvcc.org. NOHVCC staff can offer advice, and maybe even get some help from Ken and his partners!