By: James Freeman
In: NOHVCC Initiatives
With: 0 Comments

As one of the best things to do in Minnesota, families with 4-wheel drive trucks love to crawl along the back roads of our country’s public lands, often camping along the way. Signed and mapped routes are plentiful in the West. Soon, Minnesota will have an adventure route of its own for families to enjoy. It’s called the Border-to-Border Touring Route, stretching from the shores of Lake Superior, across northern Minnesota to the North Dakota border.

The Border-to-Border Touring Route, B2B for short, will wind its way through the deep and wild woods of State and National Forests, past rivers and lakes, then across prairie and farm land as it approaches North Dakota. While the exact route is still in the planning stage, project partners have a number of goals in mind. “The Border-to-Border Touring Route is an opportunity to provide a quality adventure touring and Off-Road Vehicle riding opportunity while assisting smaller, rural communities in northern Minnesota with a positive economic influx,” said Rick Langness, president of the Minnesota 4-Wheel Drive Association (MN4WDA). “In order to accomplish both those goals, as well as to be sustainable, input from people and communities is important to planning where it will be located.”

The Minnesota Department of Natural Resources (DNR) is the administrator of the project, mandated by the State Legislature to provide more riding opportunities for owners of highway-licensed 4WD vehicles, designated as Off-Road Vehicles (ORVs) in Minnesota. The DNR contracted with the National Off-Highway Vehicle Conservation Council (NOHVCC) to manage the project.

Ron Potter, Project Manager with NOHVCC Management Solutions (NMS), is planning and implementing the route, designated on public roadways for highway-licensed vehicles (HLVs). Many of the route segments will be minimum maintenance roads, forest roadways or public roads already open to HLVs. “This Border-to-Border Route will provide a mapped, signed route across northern Minnesota for highway-legal vehicles on public roads, primarily gravel roads. Depending upon how much the Counties and local areas want to promote their area, travelers will either just pass through or spend a day or two checking out many interesting and historic sites. The entire area is rich in history and would be fun and educational to explore and learn about. There are many old logging camps, logging towns and railroads, even the old James J. Hill mansion and ranch site.” Hill was a Canadian-American railroad executive who became known as “the Empire Builder.”

The ongoing project will also identify possible connections for the designated routes into communities for services such as gas, food, lodging and camping, as well as identify locations for possible loops or trails off the main Adventure Trail, which may be created in the future. Funds for the project come from the registrations and the non-refunded fuel tax paid by Minnesota ORV owners.

To develop a draft alignment, the DNR and NOHVCC held listening sessions in early 2017 across

northern Minnesota. Both organizations wanted to make sure to align the B2B in areas where local officials are supportive. A few townships have opposed the new touring route, fearing extra road maintenance. The following summer, the team reviewed the draft alignment and made modifications to improve it. A DNR interdisciplinary field review was completed on the modified alignment.

Additional public listening sessions were held in early 2018, giving the public and local officials the opportunity to review the modified draft alignment. Seven maps of the draft, each involving from one to five counties, were presented. The DNR reported that one of the common themes of comments it received was that many people confused the B2B as an ATV route, which it is not. It is for highway-licensed vehicles. 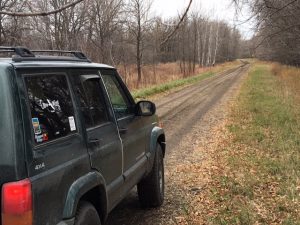 A B2B logo, signs, maps and a web page will be created by the DNR and its OHV partners. The group will also work with communities along the route that are interested in promoting their local festivals and visitor sites, and traffic levels will be monitored and maintenance assistance provided.

“Currently we are on track to wrap up the planning process for the Border-to-Border Touring Route project by the end of January, 2019,” said Potter. “This will allow for funding requests during the 2019 legislative session and, assuming it is funded, could be implemented on the ground during the 2019 construction season.”